Being here in Tennessee, we have learned a couple of things that just don't happen in Florida. For example, last night we went to the liquor store to get some Captain Morgan. As Eric was checking out, he asked the cashier where the soda was. The guy asks Eric what he was looking for and Eric replied, ginger ale. The cashier asks, "Is there any alcohol in ginger ale?" Eric says no and the cashier said "Then we don't sell it here." So apparently, you can only buy alcohol at a liquor store and hope that a convenient store is near by. Now isn't that strange?
So tonight, Eric and I walked to a bar and grill to get something to eat. The waitress comes up and asks what we want to drink. We ask her if they had liquor and she said no only beer. She mentioned however, that we could brown bag it (basically bring our own liquor). Eric and I looked at each other in surprise. It's acceptable to bring in alcohol AND, they will supply any type of mixer for your drink. How bizarre!

Yesterday, Eric and I went shopping for a new washer and dryer. We had to leave ours in Florida and the rental we're in doesn't have a set. No big deal, we'll just go buy our own. What I thought would only be a couple of hours turned into and all day adventure. We went to Home Depot, Lowes and then Sears. We couldn't make up our mind and couldn't believe how expensive they were. Finally, after feeling a little overwhelmed, we went to the public library and read consumer reports to help us narrow down our decision. (we're dorks) We read over all the ratings and came to a conclusion. We went back to Home Depot and bought the new front load set. We will never be able to afford anything ever again. It really is unbelievable to think of something sitting in your garage that cost a fortune (and it's not a car). Eric says that our next washer and dryer is gonna be named Frank...."Frank, it's time to do our laundry again." Yeah right, don't we all wish?

Here's a picture of the new
addition to our family. 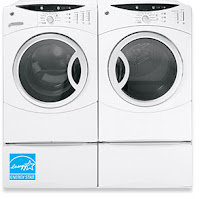 Well, I finally made it to Chattanooga Sunday night. It only took me 9 1/2 hours!!! Yuck! I had nasty weather for most of my trip so driving through Atlanta was wild and scary. My lovely traveling companion (Abigail my cat) did very well. She was basically quiet the entire trip. I am so proud of her! We are both so happy to be in our new home.
The movers were here yesterday and I have been busy trying to unpack our life. I can't believe we have so much stuff! Everything seems to be going good. So far, I only got lost once. I have been living on fast food because the kitchen is a wreck and the GAS stove and I haven't officially been introduced. So, there's no cookin' going on here! Our little place is quite nice and I have been trying to make it look like a home. Being creative sure is exhausting. Our place has 2 large bedrooms, a loft, two bathrooms, a fireplace and a hill for a backyard. Weird huh?
I'm still waiting for Eric to get here. He's still in Florida taking care of our condo. There are some things that needed fixin' so it can be rented. I can't wait for him to get here!
I'll have more pictures of our new place as soon as it's a little more organized. If I took pictures now, it would mainly be piles of boxes. So, here are a few for now. Please excuse the chaos. 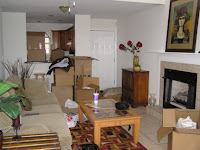 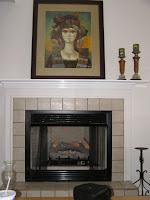 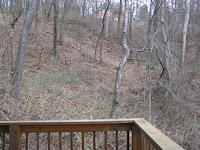 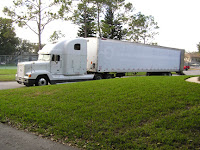 The movers came early! I got home from work yesterday and SURPRISE, there was an enormous 18 wheeler parked out front! Talk about an anxiety attack. We were not nearly ready for them. It was a mad rush to get the rest of our junk packed. There were 3 guys doing most of the work (thank goodness). They were very polite and worked unbelievably fast. This obviously wasn't their first move. They said they would take anything that wasn't nailed down and they did just that. We have nothing. Even our winter coats and gloves got put on the truck. I give Eric a hard time about that. I thought he would have realized they were an important part of this trip, especially for me. I know that it might feel like summer here in Florida but Tennessee is freezing right now!
We have to joke about it and try not to stress. Anytime he thinks I've forgotten something or tries to give me a hard time I say, "The coats are on the truck." He doesn't say much after that. It was just one of those crazy days. I don't think either of us were prepared for such a hectic day. We know that all this moving will be over soon and we'll be up there in our new home.
Hopefully with our coats.

Eric and I have only taken 2 trips to Chattanooga trying to find a place to live. Our first trip up was December 15. We stayed the weekend and drove around taking in all the sites and narrowing down our search. A few weeks later, we went on a road trip to New Hampshire. We brought our wonderful and energetic dog, Tucker. Tucker doesn't do well in the truck. He wants us to believe that he's happy to go on a trip but really, I think he's anxious. We gave him doggy prescribed Benadryl. Tucker paced and whined the entire 27 hour trip and never slept! Unbelieveable! So, on our way back to Florida, we made a pit stop in Chattanooga to nail down a rental. This time, we gave Tucker more Benadryl and it worked! Needless to say he crashed that night. 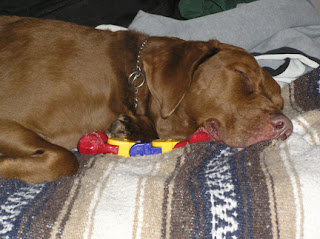 This is our place in TN and we're happy with it.
It has a beautiful view of the city! 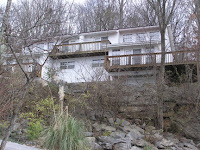 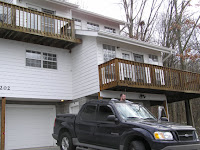 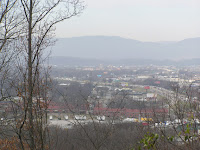 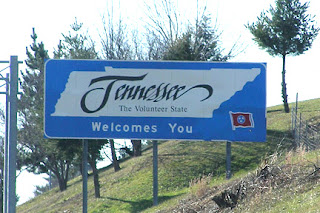 Soon, we will be experiencing a new life in Tennessee. We are both really excited and look forward to our adventure. The pets, Abigail and Tucker are looking forward to it as well (even if they don't show it). The big move takes place next weekend.