The cabinets came on Monday (the 25th) just like they said they would. (Finally) They look great! They just need some finishing touches and then they'll be perfect. The electrician has basically finished in the kitchen. We have all the can lights in, the light fixtures and the upper and lower cabinet lights. It is finally starting to come together and look like a real kitchen.
The appliances came today and we only kept the stove. The fridge and dishwasher were scratched so we sent them back. Now we have to wait for those two things to come in. It was a little disappointing to see the brand new appliances with scratches. They should be flawless. We just want what we payed for. It's just one more thing to worry about.

Remember the kitchen before? 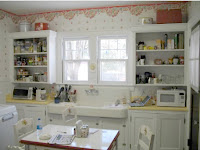 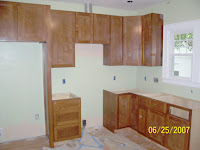 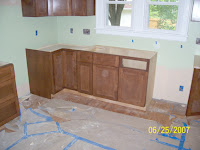 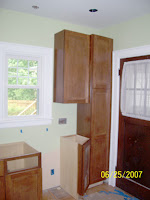 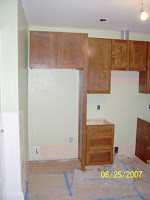 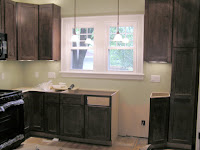 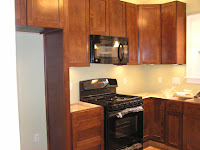 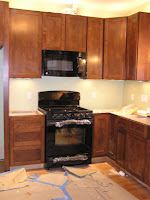 I'm heading out today to go down to Florida for the bachelorette party! It will be a nice relaxing time and probably my last for awhile. Things are gonna start getting crazy here with the house and moving and Eric going out of town for work. Plus, we have two weddings at the end of the month so we have to be out of our apartment before that. It makes me want to pull my hair out. Anyway, it shouldn't be that bad. Just busy, busy!
So, I will be back from my little vacation a week from today with pictures of our exciting weekend! 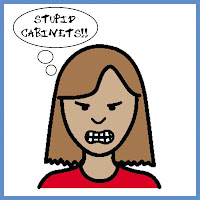 Well, it happened again. The cabinets didn't come today and they're not coming tomorrow. They "should" be here next Monday. Everytime I say that I have deja vu. I wonder if it has anything to do with the fact that I have been saying " next Monday" for the past week! I'm like a broken record. Apparently, the finish was unacceptable so that has to be done again and they have to redo a couple of doors and cabinets. So, this puts us back a week and changes are schedule. All we can do is wait. I hate waiting! 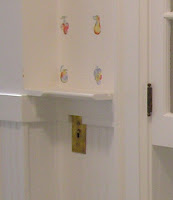 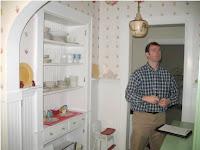 This is Eric working on the new trim we got to go around the wainescoting. The old stuff that was up there was too big and looked poopy. This looks much better as you can kinda see from the before pictures above. 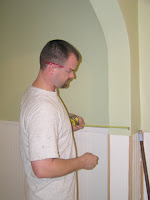 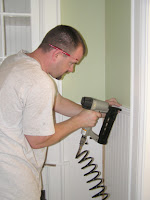 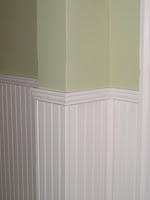 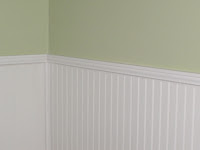 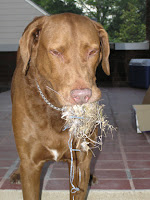 This is a picture of Tucker with a bird's nest in his mouth. You're probably wondering how he could have gotten such a thing. Well, the nest that we had in our fern was abandoned when the eggs went missing. One day there were 3 and the next day there were none. So anyway, I took the nest out in case the birds wanted to make a new one. I didn't throw the nest away, I just left it on the front porch. Tucker likes to put things in his mouth when he gets excited and thinks he's going for a walk. I guess this was the only thing he could grab quickly. What a nut!

Last night was the last night of Riverbend. Eric and I went down there and met up with a few people that he works with. We started out a pub called Hair of the Dog. It's pretty neat. We had a couple drinks and then headed down towards the river to see the fireworks which is the grand finale of Riverbend. The lead singer of Alabama sang for what seemed like forever! Everyone was basically there for the fireworks waiting and waiting. The fireworks were awesome! One of the best. It was definitely worth fighting the crazy crowd to see them. We had a great time!

Cabinets Monday (for sure this time)

Well, the cabinets are coming Monday morning. Finally! I know that I said that before but this time it's really happening. The doors were still in the process of being made and then when they get everything, it all gets stained together. So now, we're in business. I will definitely have pictures by Monday afternoon.
Last night, Eric and I went down to Riverbend. It was a good time with good food and of course ice cream. The Steve Miller Band played last night and there were tons of people. One weird thing about this festival is that you don't pay for anything with money. You have buy tokens and that gets you food and drink. It was pretty lame. We didn't realize that until we got to a food stand and everything was in the amount of tokens. We were both very disappointed. However, at least the line for tokens wasn't too long. I think that is the dumbest thing ever. We had a good time though.
This weekend we're planning on doing just a few projects around the house that need to be done. At least the big stuff is finished for now. I'm also getting geared up to go out of town Wednesday. My friend Amy, who is getting married in July, is having a bachelorette party. The Maid of Honor has planned everything and we are going to Reunion Resort near Orlando.
It should be a lot of fun and I am looking forward to it.

Well, it looks like the cabinets will be coming in later this week. Eric and I worked on the kitchen all weekend trying to get ready for the cabinet people. It's unfortunate that the cabinets aren't coming today but the kitchen looks great. I was able to paint the walls so that once the cabinets go up, I don't have to paint around them. It's hard to visualize but I think the color we picked out will really look nice against the cabinets and the dark appliances. Right now, there's still primer on the walls where I didn't feel it necessary to paint and unfished walls that were taken apart when the electrician came. I know it will look awesome very soon. I'm so excited!
We also got the patio furniture set up yesterday. It looks really nice and it's comfortable. It makes the house feel more like home. Right now I think we're aiming for moving in around the beginning on July. We may not have countertops by then but at least we can start the moving process. I'm just ready to get some stuff over there!


The color that we picked for the kitchen is called Rejuvenate. It looks light in the picture but it's not really as light as it looks. It's nice. It's a good contrast with the cabinets. 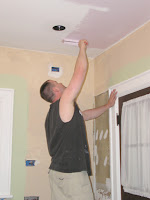 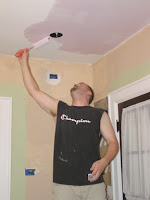 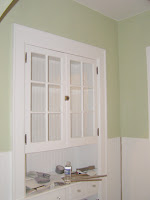 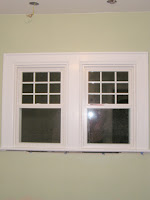 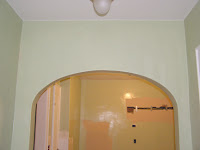 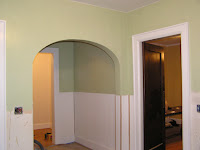 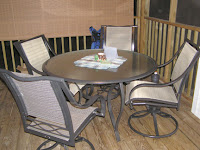 Check out the slug I found in the backyard under a brick! We have a bunch of bricks in the yard that were used to fill in a gap under the old fence. I was trying to move some of them so that the dogs could run around better and there he was. What a wierd creature!
(I found out that it's a Leopard Slug.) 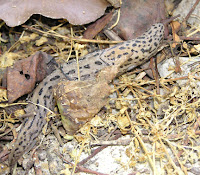 We're still doing things on the house but nothing has changed much. Actually, Eric is doing work. The only thing I have left is a little bit of wallpaper over the window in the kitchen. Other than that, Eric is mudding the walls to get them ready for the cabinets. We will be getting the cabinets on Monday and on Wednesday, the countertop people come out to take measurements. I can't wait! We did get our patio furniture yesterday. Hopefully this weekend we can get that set up and have a comfortable place to sit. 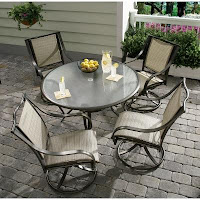 Riverbend is going on here in Chattanooga this week (6/8-6/16). It's supposed to be a big event that Chattanooga puts on every year. There's gonna be a lot of live music, food and drink. We are looking forward to going. We each have a pin that we bought that will let us in everyday and night. It should be a great time. Here's the link for more info on Riverbend. http://www.chattanooga-charm.com/chattanooga-riverbend-festival.html

Progress on the House 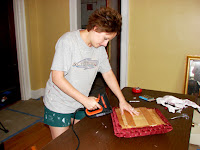 My parents came down this past weekend and helped us get a lot done on the house. My mom and I reupholstered the dining room chairs and my dad helped me paint the guest bedroom and living room. Everything looks awesome and it makes me feel like we are so close to moving in.
The kitchen had a lot of work done as well. The electricans came and got the lighting layed out with new wires and stuff. The plumbers were there to take the sink out and my dad helped Eric demo the kitchen and build the new wall. Part of the walls were ripped out and replaced with new sheetrock and we were able to get prime on the walls. My parents helped us out so much. Thanks Mom and Dad! Check out the pictures at my photo site. http://remery2.photosite.com/ 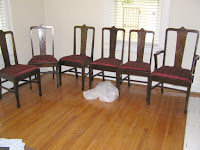 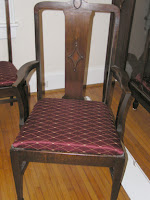