Evan is getting really good at puking in public. We were out running errands this morning and one of our stops was Old Navy. As soon as we got in there, Evan and Eric were walking/running around the store while I shopped. I heard Eric say something about a mess on the floor and when I got to him I realized that Evan was the mess! He puked all over the floor...twice! Yuck! The second time, Eric put his hands out to catch it and he sure did have a hand full. The last time Evan did this (last weekend) Eric put his hands out to catch the puke. He's getting good at dealing with this puke stuff! I don't know if I would have reacted the same way. I give Eric a lot of credit for doing what he did. What a great daddy he is! High five to Eric! Or maybe thumbs up instead!

Evan slept in his big bed! He may have been a little nervous at first or he just didn't want to go to bed because he's cutting three teeth. Who knows. We took turns rocking him for awhile to make him feel good and then Eric put him in bed and lied down with him for a few minutes. Once he was relaxed, Eric left. That was it. Evan eventually went to sleep. We have a video monitor so we were watching him roll around in his bed. He looks so small in that great big bed! Good job Evan!!!!

Posted by Becky at 8:28 PM 0 comments
Today, we took apart the crib in Evan's room. We converted his crib to a toddler bed 2 months ago and I think it's time for a big bed. So, he is sleeping in his big bed for the first time tonight! I think that he's pretty excited about it. The bed has been in his room for quite some time and he enjoys getting on it so it really isn't anything new to him. He just hasn't slept in it before. I got him a little step stool so he can get in and out of bed and that's all he did today as we were rearranging his room. The room isn't much different but we had to move the dresser. He would have figured out how to get to it from the bed since he loves to climb. Everything else is the same. I'll decide on a new theme later on down the road. I think he'll love his new bed! 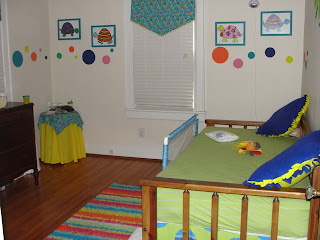 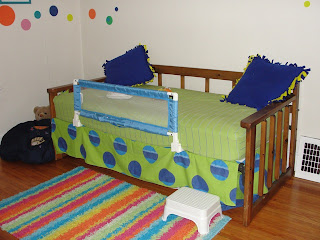 A Pukey Experience at Dinner

Posted by Becky at 9:23 PM 0 comments
Last night, Eric, Evan and I went to Amigos Mexican restaurant. We normally just get it to go but we decided to eat there for a change. Evan has had mexican food before and really likes it. I ordered him a cheese quesadilla and he had some chips and some fries. He gagged at one point and puked a little but he kept eating. After another bite of quesadilla, he gagged again and everything he had eaten came up. He puked all over! He was covered, the floor and his high chair was covered in puke. Eric and I were shocked as we tried to clean him up the best we could before getting out of there. I think the texture of the quesadilla triggered his gag reflex which caused him to then barf up everything. That was our first experience with that much vomit. I just wish it hadn't been out in public. On the other hand, we didn't have to clean it up! I never thought someone so small could puke that much! Yuck!!

Posted by Becky at 1:42 PM 1 comments
Back in March, Evan started saying bone and ball. He now says mower (his new obsession) and of course tries to say exit. Exit sounds like uh-gun and he shouts that over and over in the stores. Never tries to say mommy but can sign it. He can say da for daddy. He is still signing. He has learned to sign sleepy, bike, cat and car. He has been trying to sign a couple colors and when I sing and sign the alphabet song, he moves his fingers like he's signing the letters. I am teaching the sign for wait, shoes and play. It shouldn't take long for him to pick it up. Signing definitely comes easier to him than talking (obviously).
He's such a curious little guy. Loves to turn on the lights or watch someone else do it. He has found the smoke alarms in the house and poin
ts to them often. (another weird Evan thing) He loves the goat from Baby Einstein and enjoys rolling balls all over the house.
I recently bought him some new sippy cups that have straws in them. They are for 2 year olds. I still can't believe he's almost 2! He's not too fond of the straw idea but he'll figure it out. This is the easiest way to teach him to use a straw.
Evan loves to be outside and we got a bike trailer for him to sit in while Eric totes him on his bike. He really enjoys the bike rides. There's no way I'll tote him. He's a tank! 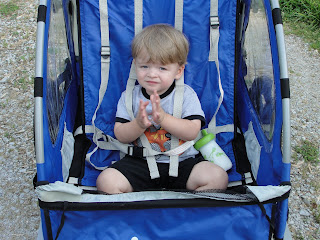 He's getting bigger everyday and learning new things. He's a busy little guy and is always on the go. I don't think he will slow down anytime soon. The big two is right around the corner. Time definitely flies! We are enjoying watching him change but sometimes seeing his strong personality develop isn't so exciting. He is very strong-willed and we are now dealing with some terrible two issues. It's definitely interesting around here. Nothing boring about taking care of a toddler. However, I can't complain about him sleeping. He is a really good sleeper. Especially since we converted his crib. He doesn't try to get out and doesn't really fuss about going to bed. He is a really good boy and we are very proud of him! The next big task will be potty training! Oh boy! That should be fun!

Here is the video of Evan riding the 4-wheeler. It's pretty short.

Posted by Becky at 9:13 PM 0 comments
I just wanted a nice picture of Evan and me together! Is that too much to ask?! He didn't cooperate at all. I think I did get a couple decent ones. Oh well. I do like the black and white one.
Take 1 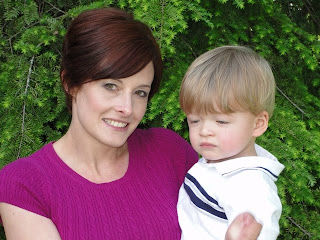 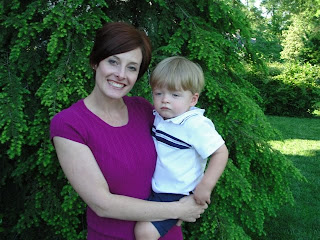 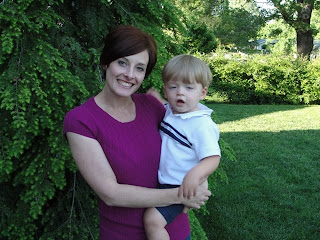 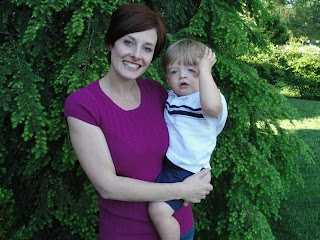 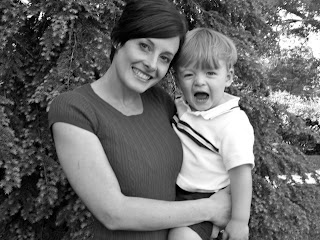 Warming up to the four-wheeler

Our neighbors down the street have 3 1/2 year old little boy. We see them outside a lot and he just loves trying to play with Evan. The other day they gave Evan their old four-wheeler. It's too small for their little one but perfect for Evan. Well....Evan needed some time to adjust to it. He was fascinated by it but didn't want to sit on it and freaked out when I made it go forward. Yesterday, Eric helped Evan adjust to it and now he loves it! I got video of him pushing the button to make it go and of him actually riding it! He definitely thought it was funny when he pushed the button and got a reaction. It was too funny. I'll have to post the video of him riding it later. My camera died as I was uploading it to the computer.