Here's a picture of the snack cups that I have for Evan. It's designed in such a way that the snacks inside won't spill out and all you have to do is reach in and grab the food. Easy right? I have been working with Evan on sticking his little hand in and pulling out his snack. He can do it! He just doesn't want to. He figured out that all he has to do is put his thumb on one of the flaps and shake the cup. Whatever is inside ends up all over the floor. Then, he sits down and proceeds to eat off the floor! I have been putting baby goldfish in the cups and I have little fish under the couch. Those are the ones he can't get to and eat. Hopefully he will change his ways and not make such a mess. (wishful thinking I guess) That probably won't happen! 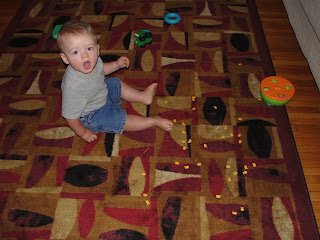 Posted by Becky at 11:43 AM 0 comments
Evan has a very silly face when he smiles. I was trying to get a picture of his knot on his head from when he fell at Little Gym. He stumbled and hit the frame on a door with his forehead. Poor thing. He's always crashing into things with his noggin. Anyway. He smiles with his entire face and looks funny. It can be seen in some of the video I've taken of him. Check him out! btw...you can kind of see the knot above his right eye. 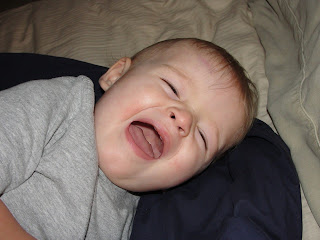 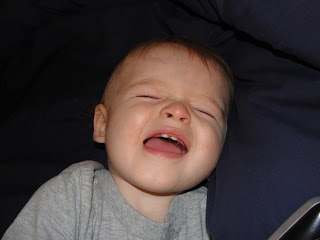 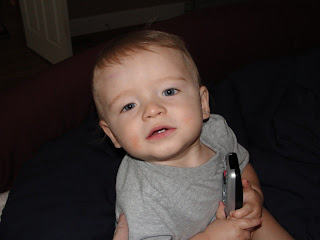 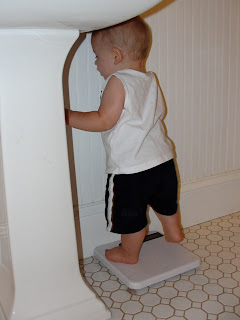 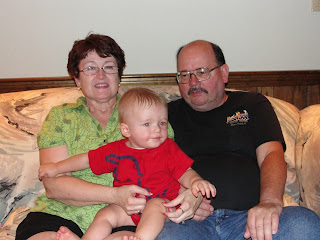 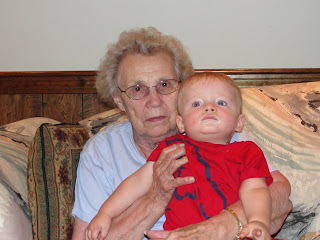 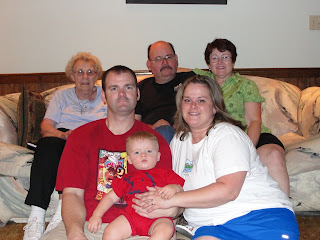 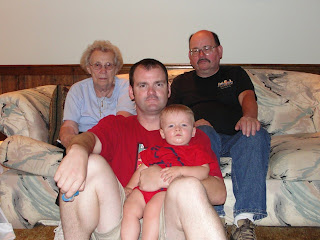 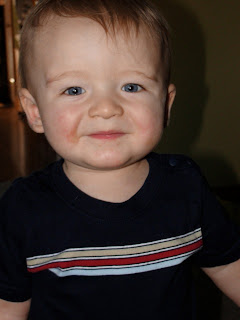 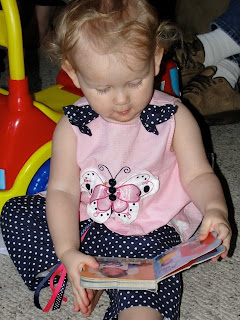 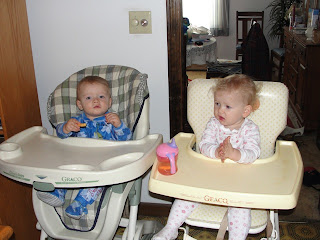 Evan has been walking everywhere! He is exploring all over the house and he is so proud of himself. It felt weird coming home from our trip and having him walking around. It seemed as though we left with a baby and brought home a toddler! Crazy! We are now getting ready to pack away the walker and the exersaucer. :(  I can't believe it! He has been trying to chase the cat but is not quite quick on his feet. He wants to run but when he tries to get his feet going, he falls. It's so funny to see him, as small as he is, walking all over.

We started him on whole milk yesterday. At first we decided to mix it with formula but he wasn't happy about that. Next, we just gave him the milk by itself and he drank it. He likes it! So, now I'm just trying to gradually get him off the bottle and so far he's down to just 3 bottles a day. That's pretty good considering it took awhile to get him on a sippy cup. He is doing great with his sippy so I don't have to pack a bottle with me when I have to go out. Nice!
He still has only 4 teeth but is working on more. I hate the whole teething process. I wish they would hurry up and pop through. It is taking so long for the other teeth to come in. In the meantime, I have been trying to take care of the ones he has by brushing them. I have been pretty inconsistent but at least he doesn't mind the brushing. However, the other night Evan was in the tub so I got the toothbrush, wet it, and started brushing his teeth. His mouth got foamy and I didn't know why. (I don't use toothpaste.) I tasted it and there was soap on it! I basically washed his mouth out with soap! Somehow in our travels, the bathwash I had leaked and got on the toothbrush. I felt so bad but the funny part is that he didn't seem to mind. It was definitely yucky!
I have more pictures from our trip that I will eventually post. I have been busy unpacking and tidying up the house. I can only do so much while the little man is sleeping. I will get them up soon and keep you posted on Evan's progress!

Today we went to JC Penney to have pictures taken of the cousins. Tia's kids Josh, Jason, and Tiana and little Evan. Josh and Jason are 8 and 10 and Tiana is 17 months. We started out with all four together and that was quite a challenge. Evan was crying, Tiana was unhappy. We were giving them snacks to change their mood but that didn't help. They took turns walking away and crying. Poor Evan was a wreck. It was crazy! Somehow we did manage to get a few good pics believe it or not. Plus, we were able to get a nice pic of Tiana and Evan together. I don't know how that happened with all the caos but it worked out. It definitely was exhausting.

I finally got some video of Evan walking. He started walking last Thursday and hasn't stopped. If he falls down, he gets right back up and keeps going. He is so proud of himself!

Evan has been walking up a storm! He is getting better and better everyday. I will hopefully have some pics and video up soon. Yesterday we went to Kittery, ME to visit friends Ryan, Sue and their little one Keele. We had a great time and Evan and Keele got along great. He really liked her and giggled at everything she did. We are also having a great time with family. Evan and Tiana (his 16 month old cousin) were playing together today. Later this afternoon we're all going outside to play. The backyard is a mini amusement park! It's going to be fun!

Evan has also started signing milk and I think he is understanding what he's doing. Today while we were in the car, Evan was getting fussy so I gave him juice. He pushed it away and signed milk! I'm so excited!

Check out the link!