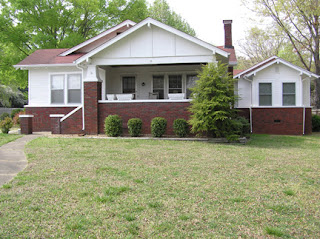 Well, Eric and I are homeowners again. We found a cute house in a really nice neighborhood. We have agreed on a price and signed the contract. We are both really excited about it. It's a 1930 bungalow with 2032 sqft, 3 bedrooms, 2 baths and the master suite is very spacious. Tucker is also excited because he will have a yard. It's great! I didn't think we would find something so fast and I feel relieved to be done with the hunt. I can't wait to get in there and make it our home.
I will have more pictures later.

Today, Eric and I went to Lula Lake in Georgia. It’s a nice place to go hiking and mountain biking and it’s doggy friendly. Tucker came with us today and he loved it. He's gonna sleep real good tonight as I will too. We started off easy since I have never hiked before. It is definitely a great workout. I found out how out of shape I am. We hiked up to a bluff where we could see for miles. There were amazing views and beautiful streams. We can’t wait to go back again!
Speaking of mountain biking, we bought me a bike today! It’s a used bike so it’s perfect for me while I adjust to it. I have no experience with mountain bikes but what I learned today is that gel filled seats are the only way to go. They are more comfortable than the standard seat. I think I rode the bike 4 times to see how it feels and that’s all it took for my crotch to become sore! Unbelievable! This is gonna take awhile to get used to. I'll keep you posted on my progress. 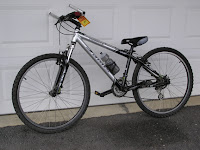 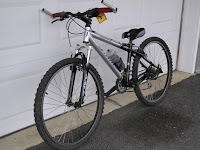 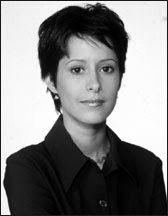 You always hear about the possibility of having a long lost twin somewhere out there. You may have never seen them but other people definitely have. I have had a few people say I look like someone they saw somewhere and comment on how the two of us could be twins. I always wondered what it would be like to run into someone who looked exactly the same as me.
Maybe I have found my twin. Maybe there are others. Who knows?
Good luck to everyone in finding your long lost twin!

Well, we have started the process of looking for a house and it is exhausting. I have sat at the computer for hours looking at the different homes on the market. I have also driven all over looking for nice areas where we would like to live and checking out the homes. I don't really have a particular style I'm looking for but I know I want something that doesn't require a lot of work. Some of the old homes around here are really nice and have a lot of character but they also need a lot of TLC. A little TLC is okay but too much is overwhelming. We're trying not to look for our dream house right now. We just want to find a nice home that suits our needs. We definitely want a back yard for Tucker and I think he would love to have his own space where he could run and play (maybe even with another puppy playmate).
We have an appointment to see a house tomorrow evening, hopefully a few on Saturday and open houses on Sunday. Today I have taken a break from the hunt to tend to our messy place. I didn't realize how messy this place had gotten while I was focused (or Eric might say obsessed) with looking for a home. I just want to find the right house for right now. We'll see how everything goes. At least we're don’t have a time constraint. I just can't wait! Keep your fingers crossed!!

So, everyone knows that Abigail and Tucker don't really get along. Tucker thinks Abbey is a toy and Abbey thinks Tucker is a big goofy beast. We still have to yell at Tucker to leave the cat alone and they have been living together for almost a year.
He has short-term memory apparently. It seems that every couple minutes his expression on his face says WOW, A CAT! He stalks and stares at her constantly and yet seems confused if he gets too close. If he tries to go upstairs and she’s sitting pretty at the top, he stops dead in his tracks and has no clue what to do. Abbey just waits and looks at him like he's stupid. I believe there's some kind of communicating going on between the two of them. It's like an old western movie when there's a duel and each of them are waiting for the other to make the first move. We watch with anticipation and then BANG, she's popped him! She gets a couple good whacks at his face and when it's over, he has no idea what has happened. Poor Tucker. He just doesn't know any better and he will never learn.
Abbey rules the roost around here. There’s no doubt about that. Maybe one day he will realize that he is nothing in her world. Once he knows that, they will surly get along or then again, maybe not.
Either way, we do love them both even if they are little wierd!
They definitely keep us entertained.

Up on the Hill

Eric and I decided to check out our neighborhood above us on the hill. There are a lot of big, beautiful homes up there! I was really impressed. We also found a couple of places that explain the history of Missionary Ridge where we live. Apparently, this area was a big Civil War site. There are plaques and monuments all around in memory of the many soldiers that died here. It's pretty interesting. 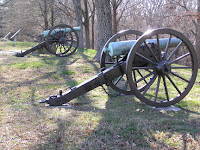 Before I left Tampa, a few of my friends and I got together at Chili's. We had a great time talking, laughing and being silly. They thought that it would be funny to announce that it was my birthday (which it obviously wasn't). It was quite embarrassing but memorable. I did get a free yummy dessert. Here are some pictures from that night.
http://remery2.photosite.com/

It stared snowing here in Chattanooga sometime in the middle of the night. I woke up around 3:00am and could see the flakes coming down. This morning when we got up, there was a nice layer on the ground. Eric and I took Tucker for a walk. At first I thought we were gonna slide down the hill but we managed to get to the street with no injuries. Tucker seemed to be enjoying himself on the walk. We threw snowballs at him and he ate chunks of snow on the ground. He loved it!
It is so pretty outside. It's kind of sad to think that later this afternoon, all this white stuff will be gone. I'm just glad I don't have to drive go out in it. As a matter of fact, a lot of people don't have to go out today. Many of the counties are closed because of the weather.
Eric left work but there wasn't much of rush to get out there on the roads. May be he'll go in and nobody will be there and he'll have to come home! That would be great!
Snow day with lots of hot chocolate!!! 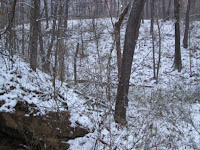 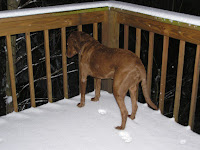 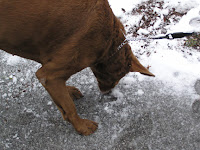 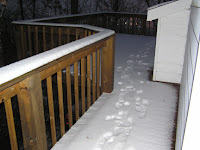 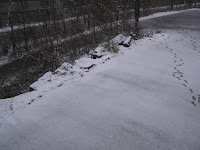 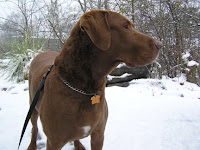